For years, I refrained from disclosing details about my education unless asked directly.  I was always afraid someone would think I was “bragging” and wouldn’t like me if I mentioned that I have an engineering degree from Stanford and an MBA from UC Berkeley.

It wasn’t until I attended a conference in Lean Startup principles that I decided to do something different.

“Oh, I’m sorry.  I thought you were younger than you must be.”

It was the thousandth time I’ve heard that.  Over the course of the conversation it came out that I had earned my MBA four years ago, which would put me in my thirties, instead of the barely-drinking-age that I look.

And then it hit me — people already assume I have less experience than I do have simply because of the way I look.  To at least get them to see me as I am, a professional with 10 years of work experience and a graduate degree, I have to say something.  Inside my head, a switch had been flipped– being seen for who I am was now more important than being liked by everyone.

Since my epiphany occurred while at a Lean conference, I decided to put the Lean method to work.  I was going to use the feedback loop to determine how to better position myself without sounding like an arrogant jerk.

The core principle of Lean is the feedback-learning loop, which goes like this: 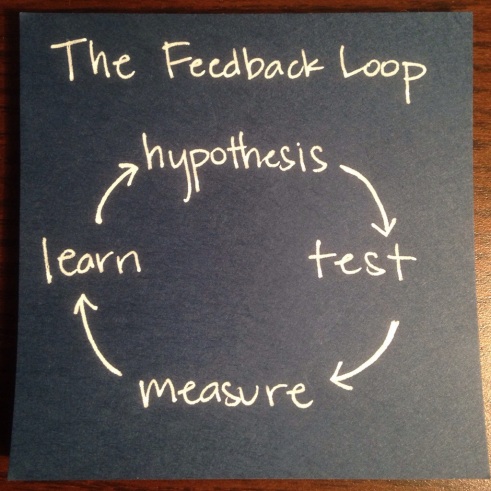 Test a hypothesis, measure results, extract learnings from your results and tweak your hypothesis for the next cycle.

Previously, I thought that at least 80% of people would be turned off if I mentioned my background while introducing myself, which is why I never did it.  I set out to test whether or not that belief was true.

The following day, I planned to attend a conference for women in STEM called She’s Geeky.  Inevitably, I would have to answer the questions “What do you do?”, so I crafted an introduction to test out with every person I met.  It sounded like this:

“I use decision analysis to help professionals navigate career transitions.  I had studied decision engineering at Stanford, but the past ten years of my career have evolved away from the technical field.  I’m really excited to finally have a chance to geek out with other women in STEM!”

That is how I introduced myself to everyone that I met.  After introducing myself, I paid attention to whether they leaned in and engaged me in more conversation, or leaned out and were turned off.

The results: the percentage of people turned off by my intro was only 2%.  That’s a huge difference from the 80% assumption that kept me from ever talking about my accomplishments.  And even though there was that one person out of fifty who was turned off, I’ve decided that it is more important for me to be seen for who I am than to avoid turning off that one person.

Do you ever sell yourself short for fear of not being liked?  What if you could experiment to see if you can present your true self in a way you’re comfortable with?  In the end, are you willing to make presenting your best self more important than pleasing everyone?